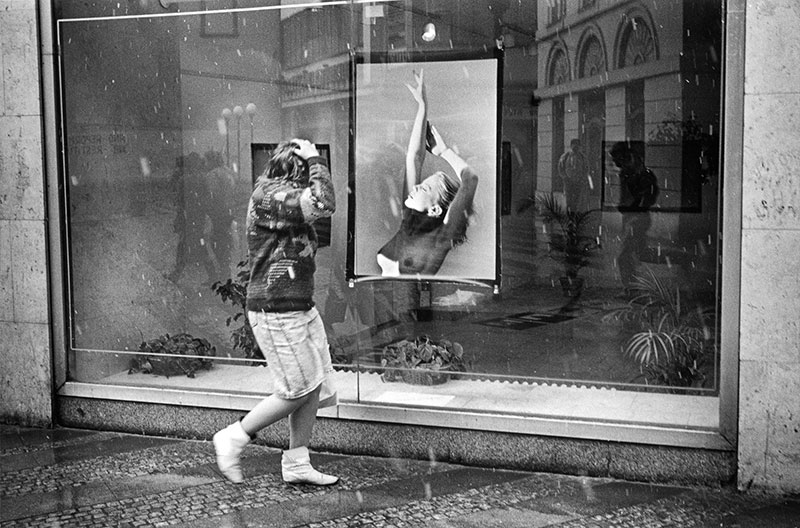 Street shooting requires an instantaneous reaction to what you are seeing. It’s this need to react immediately to whatever is happening on the street, in the moment, that excites me the most when I’m shooting.

I usually don’t wait for a picture to happen. I prefer to move into situations rather than stand still and hope a photo will materialize in front of me. But there are exceptions. And they almost always take the same form. Sometimes I see something that tells part of a story, but an element is missing to complete the photograph. I’m partial to stories that can be told in a single image. When there’s a possibility of one of these shots, I’ll wait. But I won’t wait long. I’m not a wildlife photographer waiting for an elk. I’m not even sure what I’m waiting for. I just know something or someone needs to come along to make the photo work. I trust luck and instinct. If something doesn’t appear quickly I move on.

The trouble was, there was nothing about the window display that said Venice or Europe. I needed something else in the picture to finish telling the story.

After a few moments of waiting a couple came by. They were definitely European in style. I made a quick snap of them. If it weren’t for whatever got in the way in the foreground it would have made an o.k. shot. The couple added enough interest and movement to tell part of a story. It was a photo essay type of shot, not strong enough to be a stand-alone story and a caption would’ve been needed to be clear what was happening.

A minute later, a man walked by. He was perfect. He could’ve been from another time in history, and unlike the couple who came before him he seemed oblivious to the invasion that was happening around him. The feet of the invading army. An invasion of culture that would soon change his city – actually his continent. I only made these two shots. Once the man came by I knew I had the story.

Another “waiting” photo happened in Prague, Czechoslovakia the same year. I was photographing the effect the withdrawal of the Soviets was having on the people, and the economies in Eastern Europe. As I walked around Prague I spotted the photo of the nude model in the window of a gallery. It started snowing while I was trying to figure out how to use the image in a photo. Then a woman walked by, shielding herself from the falling snow.

I make my photos by instinct, but there’s something inside of me that guides that instinct in a consistent way. I usually don’t think about why I’m taking a specific shot, I just make it. When I look at my pictures later it’s clear why I pushed the shutter.

What I feel when I see this photograph is the difference between the ideal image of who we might be, and the reality of who we are.

Another situation where I waited was when I saw a stuffed buffalo head sitting on the sidewalk in front of a store with a clearance sale sign in Santa Fe, New Mexico. It was an “only in Santa Fe” moment.

I took a couple of shots, but nothing was happening. Then the perfect couple walked by. As a bonus the neck design of the woman’s blouse is similar to the patterns on the side of the drums and the man’s necktie is similar to the shapes of the two vertical sculptures. Lucky details that help tie the picture together.