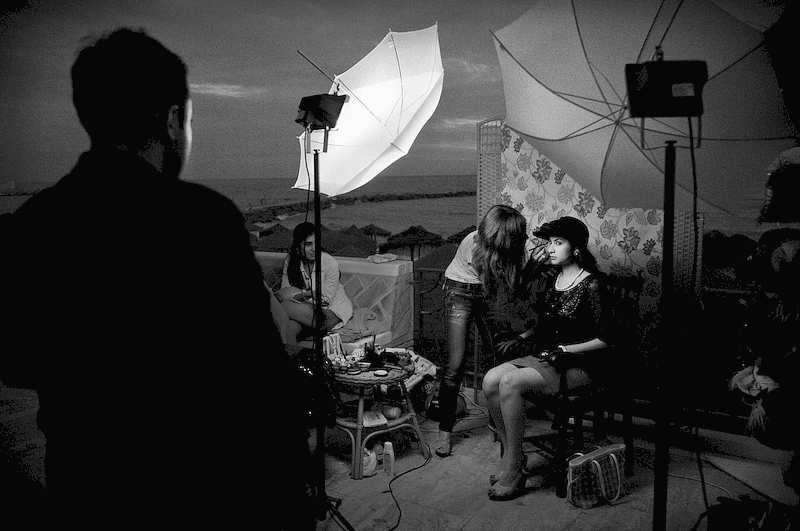 Shooting on the inside – Working your way in.

One of the advantages of Leicas over bigger and noisier cameras is they let me work on the “inside” of situations. Working with wide angle lenses it’s possible for me to stand in the middle of, or very close to the situation I’m photographing without disturbing the subjects.

Sometimes I can start “inside,” then it’s just a matter of being quiet and shooting what’s going on around me.

Examples of this are situations where I have permission to photograph, either expressed or implied, and I take enough pictures that people loose interest in me and I become somewhat invisible .

This is what happened when I was walking along the seaside promenade in Marbella, Spain one evening. A street photographer had set up her portable generator and umbrellas. She dressed her subjects in antique costumes and jewelry and took head and shoulders shots of them.

When I’m working my way into a situation like this I usually start shooting as I approach. I feel an excitement when I see a promising shooting situation. This first shot puts me in the flow of what’s going on. Because this wasn’t a sensitive subject, and was public, and the photographer was hoping to draw attention to herself, I expected I’d be tolerated if I was quiet. I wanted people to get used to me being there with a camera, to realize I wasn’t threatening. I also wanted them to ignore me and go on with their business. The “outside” shots like this also give me an overall view of what’s going on that I can use as a reference for captions later.

At this point I wasn’t sure if there was a photo here, but there was enough going on to interest me.

I started to work my way closer and looked for an angle that might work. There were a number of other people watching the photographer dress and make up her subject. When I start working my way inside a situation I get closer to the energy of the relationships I’m photographing. I have a better sense of how people are reacting to each other, how one person’s movements cause those around them to move.

It still wasn’t a picture, but I started to hope.

When a man moved in next to me to watch I noticed the fallout of light from the umbrella was just touching his face. It still wasn’t a picture, but I started to hope. I was using a 28mm lens. I moved close to him and put him in the edge of the frame and waited.

He leaned back slightly, the light was still hitting his face, the model looked at him. Because I was so close I could feel the connection between them. I had my shot.

He leaned back slightly and she looked up. I had my picture.