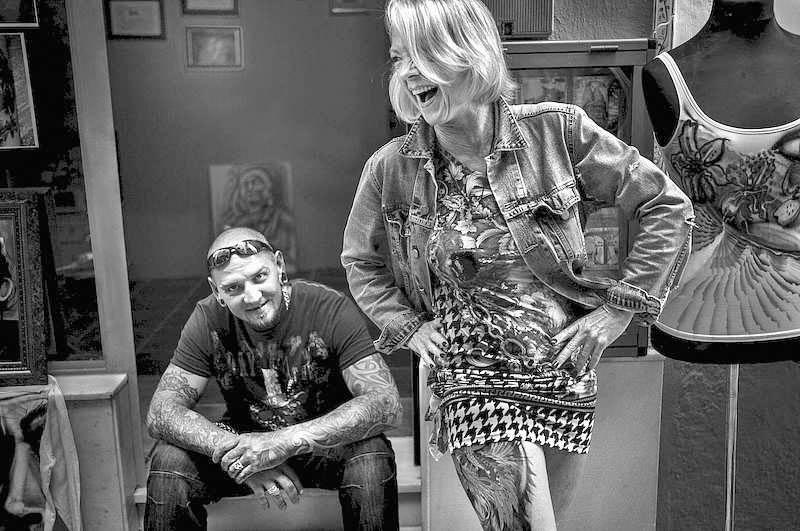 Street shooting is improvisation. Musicians who improvise know their scales so well they don’t need to think about them when they play. They think of how they want to sound and express themselves automatically.

The same is true with street shooting. Exposure and focus are obvious skills. But a skill more difficult to master is how to approach subjects in different situations in a way that lets you keep shooting. Here are some approaches I use.

You’re the official photographer, or guest photographer and have permission to shoot what you want. This could be a wedding, or any other private social function.

Often these are public gatherings or events. It could be a festival or fair. These are great places to “practice” approaching people and developing a rapport. Relax and enjoy shooting. People here expect to be photographed, but try to go beyond the snapshot by letting subjects know you’re interested in them, and what they’re doing. Ask questions, then listen. The big challenge isn’t getting the subjects to cooperate, it’s keeping the iPhone photographers out of your shots.

Festivals are a great place to practice.

These are situations where you could be shut out if you walk in cold with your camera and just start making photographs. But permission can often be earned if you’re patient and become part of the group before you start shooting. This skill is possibly the most important for you to develop.

Working in a group of people who are interacting with each other can offer more shooting opportunities than many other shooting situations. Ideally the people are occupied with each other and less concerned about you. Sometimes you’ll need to get permission to shoot something on the edge of what’s going on, something that really doesn’t interest you, but gets you in. Then you can use that connection to work your way into the group once the subjects have seen you around and are comfortable with you.

An example is the tattoo guy in Marbella, Spain. I asked him if I could photograph the tattoos on his arms. It was non-confrontational. By avoiding his face he didn’t become self conscious. Because I focused on something he was proud of I was allowed in. Over time I developed a rapport. By then he and his friends were comfortable with me. Eventually his friends joined in and I got the shot of the woman lifting her dress to show me the tattoos on her thigh, while a nearby shopkeeper teased her about it.

This is where you’ll do most of your improvising, depending on the situation. The key here is to keep your camera away from your face as much as possible. When you lift your camera to your face, everyone looks. It’s gotten to the point where, even if you carry your camera in front of you people often stare at it to see if you’re hip shooting.

When I work in the street like this I carry my camera in my right hand with the neck strap wrapped around my wrist. When my arm is at my side with the back of my hand facing forward my Leica is barely visible.

A classic method of Leica shooting in the street is to preset as many of the settings on your camera as you can, move to where you need to be for the shot, then bring the camera up to confirm the framing, make the shot and lower the camera immediately. This should only take a few seconds.

I was in Eastern Europe in 1991 as the Soviets were withdrawing. People were afraid. Their old economy was leaving and nothing had come in yet to replace it. I saw this woman in Prague walking up the street. I set my exposure and focus and waited in a doorway. As she came by I lifted my Leica and clicked off a few frames, then quickly lowered my camera. I didn’t disturb her and was able to get a photo of what it felt like to be there at that time.

If I’m in a busy city I often just shoot openly. It works as long as I shoot multiple subjects and do it quickly. In almost any street situation, shooting quickly is the key. When I shoot like this, and the subject is aware of me, I always smile and nod my head as a thank you after the shot, then I move on and keep shooting.

Another technique I use is to stand near a subject and pretend to be shooting something else.

I face away from the subject at an angle. I still see them in my peripheral vision. I look off into the distance, tinker with my camera a bit, roughly adjusting the focus and exposure for my real subject. I might take a shot or two of the pretend subject. Since I’m not paying attention to the real subject, most people lose interest in me.

Once the subject is engaged in their own business, I twist toward them and make my shot, then immediately swing back to the “photo” I’m taking in the distance in case the subject looks at me after I shoot.

Some photographers always ask people if they can photograph them. Occasionally I do that, but generally I’m not interested in a photograph of someone’s reaction to having their picture taken.

I enjoy documenting life on this planet the way I see it. The only way to do this is to stay as invisible as possible to others as I work.