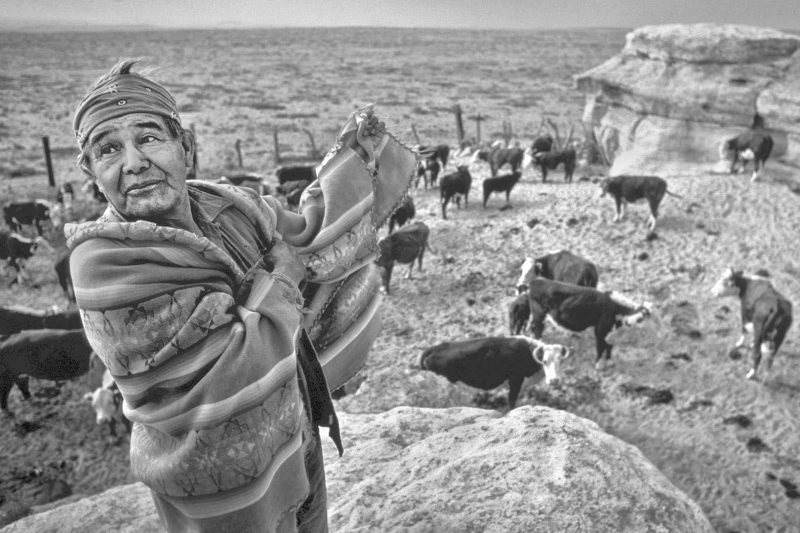 In early 1975, a mutual acquaintance sent anthropologist, Harry King, to me for some advice. Harry had a grant to study the Hopi/Navajo Indian joint use land dispute. The Weatherhead Foundation, who had given him the grant, wanted Harry to take pictures. Harry asked me what kind of camera he should get.

This was too good an opportunity to pass up. I suggested to Harry that we apply for a grant for me to go with him to take the photos he needed. He agreed. We got the grant. Harry and I spent that summer living on the Hopi reservation looking for evidence of historical land use.

Harry’s background fascinated me. After World War II he spent ten years in New York, part of the time as a newspaper journalist. He became interested in sociology and anthropology when he did stories in Harlem. Harry then moved to Los Angeles and worked in advertising and TV script writing. He used a pen name and wrote several episodes of Bonanza and Alfred Hitchcock Presents, along with other shows. From script writing he was able to save enough money to finance his sociological/anthropological/archeological studies.

He studied anthropology at Northern Arizona and Indiana Universities.

Harry then picked several experts in archeology and anthropology, and one by one offered to work for them for free in exchange for the learning experience.

One expert Harry worked with was Dr. Carl Voegelin, who had an American Philosophical Society grant to study the sociolinguistics in the Hopi and Navajo Indian tribes.

To be close to both tribes during this project Harry rented a house in the Hopi village of New Oraibi. This was the house where we stayed during the summer of 1975.

The Hopi Navajo land dispute had its roots in the 1800‘s when the Hopi Indian tribe of Northern Arizona found the land around its villages completely surrounded by the expanding, much larger Navajo tribe.

The Hopi petitioned the government for relief, and in 1882 President Chester A. Arthur ordered a 2.5-million-acre area be created for the Hopi and “such other Indians as the Secretary of the Interior may see fit to settle thereon.” The Navajo continued to use the land, and for nearly a century the Hopi repeatedly protested their case to the Bureau of Indian Affairs and the courts.

In 1974 the U.S. Congress finally took action, some believe because of a need to clarify who could sign for coal mining rights in the area. They passed the Navajo-Hopi Land Settlement Act partitioning the Joint Use land into Hopi Partitioned Lands (HPL) and Navajo Partitioned Lands (NPL). Hopis were ordered to move from NPL lands and Navajos to move from HPL lands. 10,000 Navajos were eventually relocated vs about 100 Hopis.

One day we were out with an interpreter and came across this Navajo couple. The interpreter spoke to the man, explaining what we were doing there, then told me I could take a picture. I took this picture of the man and his wife, then wound the camera. The man snapped at the interpreter who told me, “he said you could take one picture.”

It’s a common belief that the Navajo’s are ranchers, mostly raising sheep, and the Hopi’s are farmers, growing corn.

I spent a day photographing an exception. A Hopi, Willie Coin, raised cattle on the joint use land. I was able to photograph him working the cattle.

We did a lot of driving that summer. Harry had an amazing sense of where to look, and what to look for.

On one drive along the Leupp road south of Oraibi, we saw a girl riding a horse along an arroyo that ran beside the road. She turned into a home site and we followed, hoping to talk with her and her family. She and her sister, the only ones home when we got there, greeted us when we drove up. The girls were part Navajo and part Apache. Their grandfather was a well known Navajo singer, or medicine man.

Like so many of the Navajo families in the joint use area the family ranched, raising sheep, and in their case, a few cattle. Their compound included a wood frame house, several out buildings and a hogan – the traditional Navajo dwelling. Because of the spareness of plant life for the animals, the grazing range needed to be large. The buildings were isolated in the middle of the range.

The need for such large grazing areas is one reason why Navajos settled over so much of the joint use land. As I’m writing this, about 600 Navajo families have refused to leave the HPL lands. The problem still isn’t fully settled.