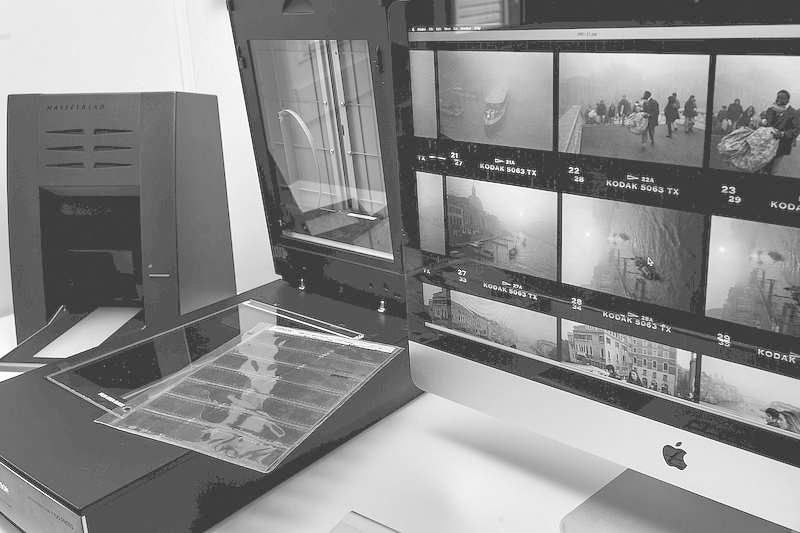 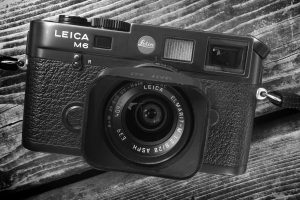 Leica M6 film camera[/captioThis isn’t a post about the ongoing battle between film and digital. I shoot both depending on my needs.

In my ideal world I shoot film. I love the small, quiet Leica M6 bodies. I love taking a picture, forgetting about it, then rediscovering it later. That said, I spend most of my time in the real world where I shoot using digital Leica M9’s and the Leica Monochrom. They are slightly bigger and not as quiet as the M6, but otherwise fairly identical, so the transition isn’t too difficult.

[2021 – Here’s the first update: I now own Leica M10’s that are the size or the analog M6’s. One of the M10’s is the M10-D that is a digital camera with no viewing screen, and the shutter is quieter than the shutter on the M6. Since most photographers don’t have access to the M10-D the original text still applies. I’ve made a post about the camera if you’re interested.]

My primary interest in photography is in making the photos. I barely tolerate the necessary processing and proofing that follows. For the times I use film I’ve worked out a hybrid system that lets me shoot my Tri-X, then deal digitally with only the images that deserve my attention.

The Hybrid System
One way or another you need to get your film processed. Either by a lab or by doing it yourself. The film only needs to be developed. The contact sheets are done digitally.

Because a hybrid system involves changing the image medium from analog to digital it’s critical to produce the best and most consistent negatives possible. This is one reason I like the Leica M6 with it’s built-in meter.

When I have a lot of film to process the larger eight reel tanks save time. With the larger tanks I use my darkroom because the processing method requires more space than with the four reel tank.

If you’re processing four rolls of film you only need a single tank. The film is loaded onto the reels and put into the tank in the dark. After the lid is back on the tank, the rest of the process is done in the light.

You can’t pour the chemistry in and out through the lid of these tall tanks like you would in a four reel tank. It takes too long and your development will be uneven.

With the larger tanks it’s best to use several and fill each one with the chemistry you’ll need before you start. It helps to have an extra light-tight tank to hold the loaded reels of film before processing. Once the film reels are loaded, and everything is setup and double checked, I set the timer and turn off the lights. I take the lid off of the developer tank and lower the eight rolls of film into it. After the lid is back on the tank I agitate as I would with a smaller tank. I continue the process, then wash and dry the film.

Ebay usually has these large tanks, often full of reels. If they’re not available when you look, keep checking – they show up.

Unless I need exhibition prints this is the end of the analog trail. From here on everything is digital.

I cut the negatives into strips of five, then file the film in looseleaf archival negative pages. It’s important to cut the film into strips of five rather than six because of my proofing process. It’s possible to shoot 36 or more shots on a roll and there might be some stray shots left over after cutting. I put several of these in their own separate filing page. I number each roll yyyy-roll# like 1995-1, 1995-2 etc. I write the roll number and a short description on the top of the file page using a Sharpie marker.

Scanning contact sheets using and Epson V700 flatbed scanner and viewing the enlarged contacts on an Apple iMac computer. In the background is an Imacon scanner for scanning single negatives.

I proof my negatives using an Epson V700 flatbed scanner that has a light source in the lid. My negative page fits perfectly on the scanner bed. I put a piece of Plexiglass on top of the negatives to hold them flat. I use VueScan software and scan at 300 DPI. At that resolution I can blow up each proof image on my computer to about 3×5 inches without pixelating. You can see an example in the shot above. After I scan the film pages I file the contact scans in my master contact sheet folder. I file the contact scans in a folder hierarchy by year. Inside each year I file that year’s contact scans. I name each contact jpg with my yyyy-roll# (1995-1…) to match the negative file sheets.

I load the new contact sheet scans into Photo Mechanic and quickly keyword them with the main subjects on the roll, then I back everything up.

The Epson Scanner is a great buy, and might be the only scanner you’ll need. I don’t use it to scan individual negatives, but many people do and think it’s great, especially for web use.

I have two film scanners. The Imacon 345 in the photo above and a Nikon Coolscan 5000.

The 345 is a smaller Imacon model that was made for up to medium format film. It’s been discontinued. [2021 – Glad I sold it. I only hooks up with firewire.] Getting a new Imacon now is like buying a car. They’re unrealistically expensive. I have to say that the scanning software that comes with an Imacon is almost worth more than the scanner. It’s incredibly easy to use and the scans are excellent. The bad news. Each full res scan with my scanner takes about five minutes.

The Nikon scanner is incredibly fast by comparison. But there are drawbacks. The difference between the light source in the two scanners is like the difference between diffusion and condenser enlargers. EVERY speck of dust, every scratch or blemish in the negative shows up on the Nikon scans. The same negative on the Imacon, with no special processing, needs almost no retouching. Also, Nikon discontinued their scanners and quit supporting their software. There are other brands of scanning software that I’ve used, but they are all problematic in one way or another. Silverfast is expensive, crazy complex and unintuitive, Vuescan is funky. But they will both make good scans if you are patient enough to master their quirks.

To the rescue – camera scans

I know that you’re not going to believe this, but the results that I get from photographing my black and white negatives with a digital camera are so good that I almost never use my $5,000 Imacon scanner any more when I’m scanning for the web.

I first read about photographing negatives in Peter Krogh’s DAM Book on digital asset management. Peter recommends this as a way to digitize large photo collections. He calls it Camera Scanning. He uses an SLR system with copy attachments. You can do a Google search for “camera scans” and watch videos by him about the technique.

My M9 has no live view so I’ve had to improvise. I use a Leica BEOON/16511 camera stand that I bought on eBay from a photographer in Holland. I use it with a Leica Focomat enlarging lens and the included extension tube combination that gives me 1:1 magnification. There’s a ground glass viewing hood for focusing. After I’ve focused, I replace the hood with my M9 to photograph. For a light source I use a small, high quality light box.

A while back I edited years worth of negatives from the pre-digital age. I had contact sheets of everything I’d scanned with my Epson. I went through each contact sheet on my computer screen and made a black dot on the outside of the matching negative file page over the shots I wanted to copy. I set up the copier and hired an unskilled worker to photograph several thousand of my negatives. This project would never have been done using my scanner.

I file my negative sheets in archival looseleaf binders with slip cases. I buy the binders from Light Impressions. As a final step, I pull the strips with my AAA portfolio shots from their pages and put them in new pages that I keep in a bank safety deposit box.